With PharmaLight´s Photizo® and Warp 10® as part of the preventing care in the stable you´re one step ahead.

Treatment before hard workout increases the blood circulation and relaxes the muscles. It´s like an extra warm up before warm up – the risk of injuries decreases and it´s easier for the horse to perform at its highest level. Enhanced performance meaning a better condition by preventing strain and injuries and enable recovery after training and competition. If the horse has a certain sensitive or problem area preventive treatment is possible to decrease risk of injuries. After hard training treatment of the big muscles enables faster recovery and less waste products. If an injury occurs anyway treatment of the injured area increases the body´s healing process – according to studies on humans up to half the healing time.

The connection to NASA

Competitors links to NASA and NASA:s research to gain credibility. It´s important to remember that WARP 10® is the only FDA cleared for market device that utilizes the HEALS® technology. Developed for and used by NASA and DARPA. The studies are unique for this system and product.

Reed more in the menu to the left about the different LED treatment devices to find out which suits You best.

1. LED light treatment stimulates the production of ATP in the mitochondria
ATP is the major carrier of energy in the cells and is made by the cell’s power units, the mitochondria. Without ATP, all cellular functions cease, and an increase in ATP allows the cells to accept nutrients faster and to dispose of waste products by increasing the energy levels in the cell. ATP provides the chemical energy that drives the chemical reactions of the cell. ATP production is enhanced by light therapy, as light of a coherent, optimal wavelength energizes the cytochrome b structure, allowing it to donate electrons to the electron transport chain at a greater rate to increase ATP production.

3. Cellular regeneration
Once a cell has died, the body needs to make new cells to replace the compromised or damaged cells. Light therapy prevents the overproduction of scar tissue and ensures quicker (up to 250X) cellular regeneration. This is of major importance for accident victims to regain full functionality. This accelerated “replacement” effect is seen in all cell types. Once cells have been boosted with light therapy they can resume their normal functioning and make new blood vessels, nerve tissue, bone cells, cartilage, etc. Light therapy does not cause cellular overgrowth or cancer – cells are merely recharged to resume their normal functioning.

4. Clearing of inflammation and increased lymphatic activity
Local inflammation, although necessary, chokes a cell. LED light treatment lessens inflammation and ischemia, helping the cell to take up nutrients and oxygen from surrounding tissue and blood vessels. Light therapy relieves ischemia and stops cell “choking”. Edema has two components i.e. a liquid part, which can be evacuated by the blood system and a proteinaceous component which is comprised of proteins which have to be evacuated by the lymphatic system. Research has shown that the lymph vessel diameter and the flow of the lymphatic system can be doubled with the use of light therapy. The venous and arterial diameters can also be increased. This means that both components of edema can be evacuated faster to reduce swelling.

5. Increased immune system activity
Near-infrared light has been shown to increase immune system functioning. The exact mechanism by which this occurs has not been eluciated, but several studies have shown a systemic effect in subjects on whom light therapy was used. This means that local treatment of a wound with Photizo® has a general immune enhancing effect.

6. LED light treatment increases blood supply
Increases blood supply to areas by stimulating the formation of new capillaries and blood vessels to replace damaged ones. This speeds up the healing process by providing more oxygen and nutrients needed for healing to the damaged cells. It also accelerates waste and debris removal form the site of injury. Light therapy has a vasodilatory effect.

7. Systemic effect and reduced excitability of nervous tissue
LED light treatment assists in reducing the excitability of nerve tissue, thereby relieving pain. There is also a sharp increase in endorphins and serotonin, providing a further systemic pain-relieving and calming effect. This is of importance in acute and chronic pain relief. 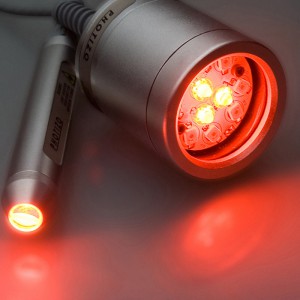